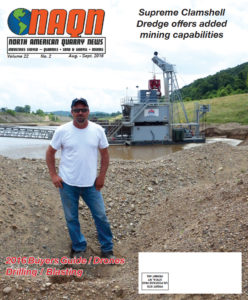 For operations at the Jaymar, Inc. Reedsville Plant near Reedsville, Ohio, the decision to acquire a Supreme Manufacturing 8-cubic-yard clamshell dredge, gave daily production a significant boost to the company’s sand and gravel mining operation. The new dredge provided an additional source of production to compliment the ongoing high bank surface mining operations that have been in place for nearly twenty years.

According to Bryan Hall, plant supervisor, Jaymar, Inc. started with Bryan’s uncle, Jay Hall, Jr., as a business enterprise in the coal mining industry in Vinton County, Ohio. Over time, Mr. Hall acquired properties along the Ohio River like the Reedsville site, to help expand his coal mining and barge loading operations. With the advent of the sand and gravel mining operation and barge loading facility in Reedsville, Hall’s focus shifted from coal to sand and gravel and in 1994, the Reedsville plant began to take shape in the planning stages.

Production came online in 1999. Today, the facility is able to load material at the rate of approximately 1600 tons per hour, giving it the capability to load just under one barge per hour. “Last week, we loaded 11 barges in 12 hours,” said Bryan as we began a tour of the expansive 300 plus/minus acre production site.

Bryan, who has been a part of the business since graduating from high school in 1993, is a third generation family member (cousin) in the operation. Bryan said that during his time at Jaymar, he has seen the company grow to become a major supplier of concrete and masonry sand as well as assorted aggregates for the Shelly Company, a subsidiary of Oldcastle Materials.